For those who are looking for an extra bit of challenge, show us two photos ( I have three) each one showing a different angle or interpretation of the same subject:

This week’s Photo Challenge on Perspective was a challenge of a different sort for me. I couldn’t find any photos that I thought could be used but then my creativity kicked in and I was away! I love that feeling when I go from nothing … to a small thought … then on to full enlightenment about the subject.

Geoff and I were travelling down the New England Highway last year to the Hunter Valley for a week’s holiday in this wonderful wine region in New South Wales, when we stopped for the night in Armidale which is situated in a much cooler climate than where I live.

For years, we had always wanted to drive down this highway in late April because it is known for its beautiful autumn leaves. You see in Northern Australia, where we live, we don’t see many trees changing colour because we live in the sub-tropics not like Armidale which is in the highlands. When we checked it out before leaving, that the leaves would be at their peak, we decided to stay the night in Armidale on our way south.

And yes, we found beautiful sights all through this area, but what we hadn’t countered on was all the other delights that the little town of Armidale had to offer. Before leaving town the next day, we decided to check out some of them and in particular the heritage railway station. Here we found something interesting that really made our day.

Photo No. 1 The Two walker toys

On the walkway at the front of the station was a sign for a shop which was in the old railway building … but this was not just any shop … it was a Fairy Shop! But, what I hadn’t noticed until today, whilst looking closer at my photos, were these two toy walkers on the sidewalk. Where had they come from? What were they doing here? Why hadn’t I noticed them there before?

The Fairy Shop did not sell toys but then I realised that there was a toy shop nearby and they must have placed the toy walkers next to the sign to grab people’s attention! Yet, I had never ‘seen’ the toys there before. So, for my photo I have isolated the two toy walkers to identify them in their own right.

The photo above then, is the FIRST part of the story …

Photo No. 2: The sign for the Fairy Shop with the toys at left.

Here is a sign for the Fairy shop. And note the two walkers on the left. When I saw the sign I knew I had to visit the shop and see what it was all about … however I was yet to meet the lady who ran the store … and here I was in for the shock of my life.

The shop was such a magical place that I was almost overwhelmed. I was not allowed to take photos which was such a shame because it was like visiting Fairy Land dear friends. Small, but jam-packed with creativity. Take a look at the Facebook page and you’ll get the idea https://www.facebook.com/pages/The-End-of-the-Rainbow-Fairy-Shop/492869017423800?ref=profile. Amazing!

And now the photo above is the second part of the story. 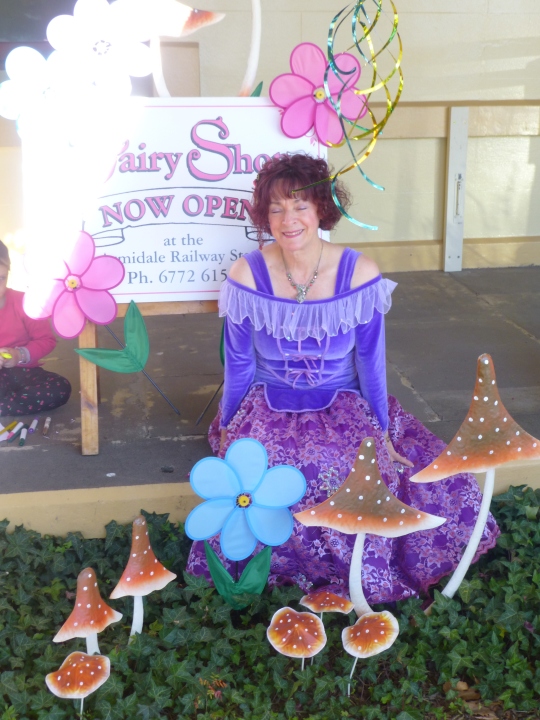 Photo No. 3: The Fairy Lady herself; the picture which tells the whole story

This is a photo of the Fairy Lady, a title by which she is known in the town. Once I walked in to ‘The End of the Rainbow Fairy Shop’ I had to navigate through thick green vines hanging from the ceiling, silver cobwebs and all sorts of other forest delights. It was a feast for the eyes and all the senses … I couldn’t take it all in at once. I had found a place of delight with lots an lots of treasures to buy for children … or even adults.

Now that I look back at this time, the thing I love  about the photos I took – which are all related – is that each photo tells a different story.

The first photo says “I think some children left their toys on the verandah of this old railway building.”

The second photo says “oh there is a fairy shop here also … and a toy shop nearby and that’s why the toys are here!”

The third photo says: “Now here is the WHOLE story …there is  a Fairy Lady is in the Fairy Shop (I asked her to pose for me) and she talks and acts like a fairy.”

I really think this lady believes she IS a fairy folks! She called me ‘fairy’ throughout our discussions even when I was paying for the colourful jewelled tiaras I bought for my granddaughters, saying “Thank you Fairy.”  She told me she has always loved fairies from the time she was a girl, and she cannot believe that she has had a career, thanks to fairies, for so many years. She also does Fairy Parties for adults as well as for children’s birthdays.

And that dear friends, is what happens to people who find their PASSION and follow it. If only it was that simple for all of us. I walked out of that shop feeling ten feet tall because I felt that it was possible to love something totally unusual and make a career out of it. I felt good also because I had entered a small magical land and for the time I was there, I had forgotten all my worries. I stayed so long that Geoff got impatient and I wished that the Fairy Lady would make him disappear!

I think I was touched by fairy dust in that shop friends. I had become a child again where ANYTHING was possible. And yes, it was a totally new PERSPECTIVE  for this old girl when I was called ‘fairy’ …

Posted by Tess in Inspirational Tags: DPchallenge, perspective, postaday, The Fairy Lady of Armidale, The Fairy Shop at the end of the Rainbow, the heritage railway station at Armidale, weekly photo challenge perspective

Dear friends, as I am in my third year of blogging, I invite you all ... where I live in Brisbane Australia ... to walk with me as I share this Journey called LIFE. Come along for the ride!

Here on my HOME page you will see the latest post I have published. Go to the very very top of the page where you will find some headings which are other pages that I write on. Click on them to find out what I have published there. Enjoy!

Archives: posts by month from 2012